Yellowstone National Park, tucked away in Northwest Wyoming, is one of those bucket-list places that is easy to dream of seeing, but for distance, time and expense factors, never feels like it is truly on the cards. My interest in the park was heightened after reading Bill Bryson’s A Short History of Nearly Everything which, among other things, detailed how the park sits atop a ‘super volcano’ which has shaped the park’s unique beauty, the effects of previous devastating eruptions, and the terrifying fact that it could blow again at any time.

But to say Yellowstone could blow at any moment is to acknowledge that on a geological time scale (which could be anywhere between now and a few thousand years) geologists expect that the supervolcano may erupt again. 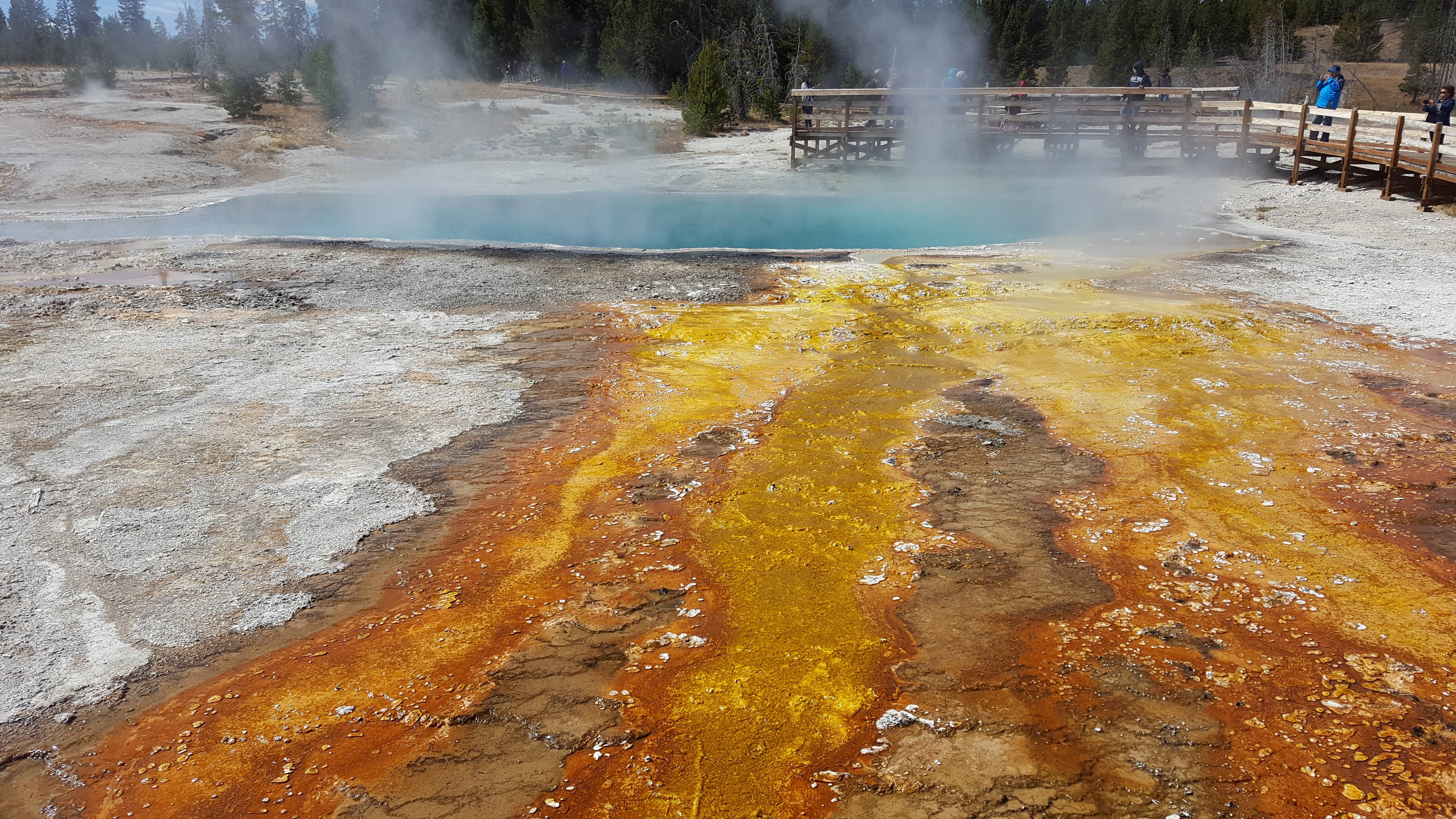 So here I am, living in Vancouver and dreaming of Yellowstone. For months I’ve researched flights, considered best time of year, accommodation options, carefully counted and worked out the most effective use of vacation time, done all that stuff that makes a vacation happen. Even still, it seemed more like fantasy; Flying is expensive and I’ve already tentatively planned out how I’m using my vacation allowance well into the new year.

As it turned out, some vacation plans we made had to be postponed, leaving us with a week up our sleeves, and a car we bought earlier in the year with which to take us somewhere. Anywhere! Oh yeah, and this was almost mid-August, so Summer was as good as over. It would still technically be summer for another 3-4 weeks, and average temperatures in Yellowstone were supposed to be in the positive digits, so we figured; why not?

Bison rutting on the plains

A road trip from Vancouver to Yellowstone looked reasonably do-able. Google indicated it’s about 14 hours drive, so we planned for two days driving to get there, stopping in Spokane, WA, and again in Bozeman, MT, before entering the park on the morning of the third day.

There’s a short video of the road trip, showing much of the spectacular scenery, both in the park itself and along the way through Washington, Idaho, Spokane and Oregon:

We encountered some pretty wild weather, literally everything from glorious sunshine, through to freezing rain, snow and thunderstorms. As you see in the video, it snowed on us while we set up our tent on the first night, 30 minutes later it was blue skies, and overnight the temperature dropped below freezing with us waking up to an ice-covered tent.

The place is incredible, and neither the video, nor photos, do it justice. There is just so much to see, and what surprised me most was just how drivable the park is. You’d barely scratch the surface, but it would be possible to rush your way around the entire park loop in just a day and a half if you really had to. We had four days, which seemed like the perfect amount to take it at our own pace, seeing all the major sites such as Mammoth Hot Springs, Grand Canyon of the Yellowstone, and the multiple geyser basins including Old Faithful. Speaking of which, I have to say Old Faithful seemed incredibly overhyped and underwhelming, but lucky for us an even larger (and in my opinion, more impressive) geyser is located a short 10 minute walk away. And better still, we were treated to a rare 3-in-1 eruption! 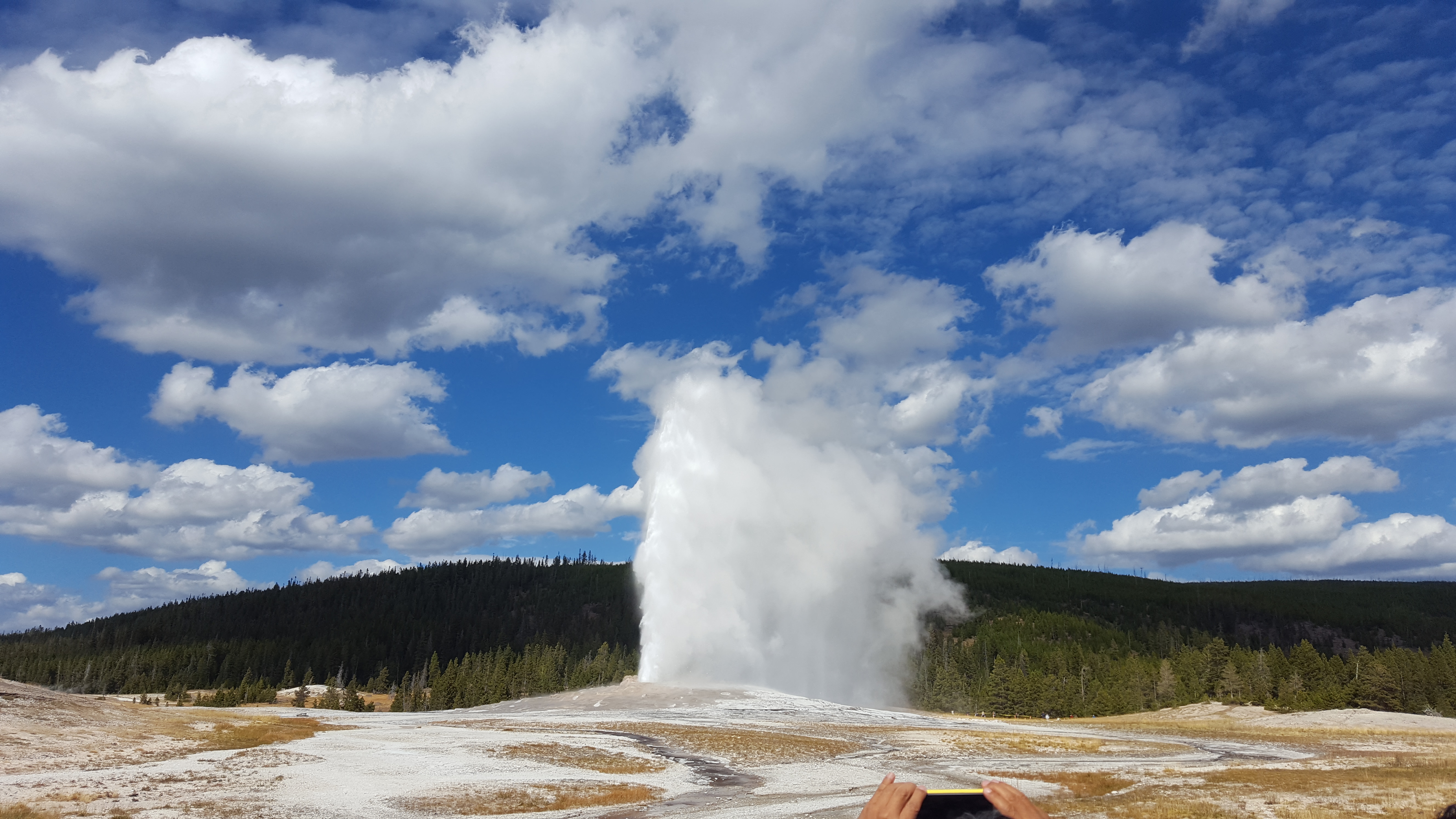 It still blows my mind to think how much we packed into 4 days. Not just geological features, but wildlife too. I saw my first ever moose, a mama bear with her cubs, and loads of bison. Oh man, the bison! They were everywhere! It got to the point that I joked how Yellowstone is a lot like Europe in that when you first arrive, everything is just so different and interesting compared to what you know, and then after a few days incredibly ornate cathedrals and buildings that are literally hundreds of years old suddenly become par for the course, and ‘just another cathedral’ or old building. It’s a little like that in Yellowstone, your initial awe of this massive beast quickly turns into your 300th bison, you sitting there behind the driver’s wheel wishing it would just hurry up and GET OFF THE DAMN ROAD SO THIS TRAFFIC CAN JUST MOVE AGAIN!!

Having said all of that it was an incredible trip, one that I’m so very lucky to have been able to go on. Hopefully one day I’ll get my chance to go visit it again.

For more images, checkout the album from Yellowstone National Park